Firmware for AVR based two-dimensional LED matrices, especially the Blinken Borgs from Das LABOR. Main platform is the Borg16 construction kit. Other supported platforms are the LED Brett projector from Hackerspace FFM, the ELO Ping-Pong Board or the LoL Shield from Jimmie P. Rodgers. 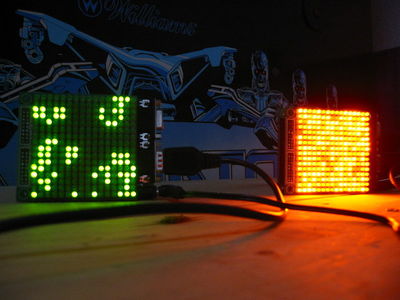 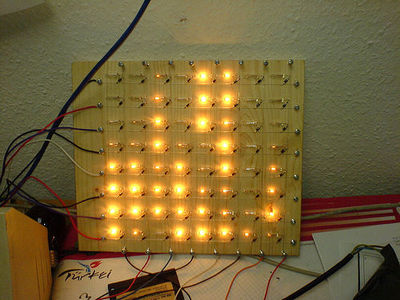 Supported build platforms are Linux, FreeBSD, NetBSD and Windows (via Cygwin). Due to customized linker scripts, simulator support is currently limited to x86 and x86_64 archs. Following dependencies have to be met:

Package names are based on Debian/Ubuntu repositories. Please adapt the names according to your Linux distribution (or BSD for that matter).

Open a (Cygwin) terminal, change to your checkout directory and type:

In case you build on BSD, just use 'gmake' instead of 'make'. This starts an Ncurses based text interface for configuring certain aspects of your target platform. After a fresh checkout, the first thing you do is to load a profile with sane defaults. In the menuconfig interface, select 'Load a Default Configuration' and choose a preset. After hitting enter, the main menu returns immediately. You can either tune your configuration or just exit (choose 'Yes' at the confirmation dialog to save your stuff).

Be careful if you use an IDE like Eclipse to manage the build, as integrated terminal emulators tend to choke on Ncurses generated output. Make sure that 'make menuconfig' has been run at least once in an ordinary terminal emulator after a fresh checkout or after issuing 'make mrproper'.

Note: Always use 'make clean' after changing something in the menu, because subsequent builds may be broken if you don't.

To build for the actual target platform, just type:

This yields an 'image.hex' file which you can flash to your AVR device.

If you want to test and debug your code within a GUI application, you can use the simulator:

Again, use 'gmake' instead of 'make' on BSD.

You can start the simulator by typing ./borgsim(.exe)

Please keep in mind that the simulator is NOT an emulator. All it does is compile the source code to a native host application so you can step through your C-Code with an ordinary host debugger. The GUI thread reads the simulated frame buffer every 20ms (40ms on Windows) and draws its contents.

Joystick movements are simulated by the WASD keys and SPACE acts as the fire button. The OpenGL based simulator (Linux/BSD) enables you to adjust the viewing angle of the LED matrix via the arrow keys (not available on Windows).

LoL Shield on Arduino (and clones)

Although this project supports the LoL Shield on various Arduino boards, it does not use the Arduino software stack at all. Instead, it follows the classical Unix approach involving make files and mere command line tools. If you haven't used anything besides the Arduino IDE, getting the Borgware to run (let alone extending it) might be difficult at first. This README won't even try to cover all workflows involved.

However, here are some hints:

Digital joysticks are supported on the 'analog' pins, which are used in digital input mode with internal pullups turned on. Just connect them to GND to signal joystick movements.